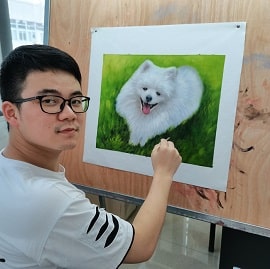 He may not consider himself special or unique in any way, but Corey has quite a story. When Corey was a young child, a high fever caused his hands to swell up like balloons and took his sight away for a short time. That experience, he said, had two strong impacts on him – first, he no longer took his life or health for granted, and second, he developed a hunger for light and color which became his first motivation to become an artist.

Corey’s favorite medium as a painter is watercolor because he feels it allows him to express the “miracles of the world” most beautifully. He especially loves the sunflowers series painted by Van Gogh. Their upraised buds together with the dying petals reminds him that there is a light side and a dark side to everything. He feels that these masterpieces taught him about the meaning of fate.

He is a big fan of architects as their work is full of beauty based on order and regulation.

He recalls that his favorite painting he painted for Paint Your Life was of an elderly couple. Corey says the clear affection between the couple reminded him of his own grandma and grandpa and how they fell in love with each other and supported each other through the hard times.

Ultimately, what inspires him most in the world is his own mother.

We will review it and will contact you once we add it to our testimonial pages. Thanks again!

Thank You For Submitting Your Reveal Video!

We'll review it shortly and let you know once it has been posted and the 0 credit has been applied to your account.

Your profile was saved successfully

Thank you for contacting us

We've received your request and will be in touch soon.